Rabbitohs prop Tom Burgess says his knee is recovering well as he hopes to return just four weeks after suffering an injury that should have sidelined him for six.

Aside from being the first week of the finals, it's an even more timely return given his older brother Sam has copped a one-match suspension for pulling the hair of Rooster Billy Smith last week.

"I trained yesterday (Monday) and today (Tuesday) and pulled up good so we'll just see how we go with recovery until the team run but it's looking pretty good," Burgess said.

It was a positive to only miss four games mid-year around the byes when an ongoing ankle injury required him to go under the knife before a "freak accident" in round 22 when he collided with ball carrier Dylan Napa.

"The clinical diagnosis of it was that it was off the bone, the medial, which is usually six weeks so I've actually pushed it from what they thought it should be," Burgess said.

"So it's going well, to be fair. If I can get back this week it will be a quick return."

Burgess's twin George is eligible for selection after serving out his nine-game suspension for an eye gouge on Robbie Farah. He is currently named in the team's reserves list, though starting prop Liam Knight (head knock) is still under a cloud.

"It's good to have [George] bouncing around training, good energy," Tom said of his twin.

"If selected he'll be ready to go and he's looking good in training. It's funny how it worked out I suppose, we came back and Sam got a week. Things just work sometimes.

"He'll be feeling fresh, the rest might have been good for him being a bigger body but he's definitely been training hard and keeping his fitness up so it might be a positive for him."

Tom wasn't yet sure what the prognosis on Knight was.

"He's still going through that process they have to go through," he said.

"I think his was a fairly serious one. He ran today but didn't do any contact so he'll continue that but I think he's on track for it."

Burgess was happy to embrace another round of the old Roosters-Rabbitohs rivalry, having welcomed club co-owner to training that morning with the Hollywood star and die-hard Rabbitohs fan addressing the players to get them pumped up for the game, including reading a passage from the famed 'Book of Feuds'.

"Big Rusty came in here to pump up the boys," Burgess said.

"The passion he has for the club is unreal. I've been exposed ever since I moved here, and even before that. You put 10 cents in him and he'll talk about Souths all day."

Despite having grown up in the north of England, Burgess said he had learned to embrace "the oldest rivalry in rugby league".

"Two foundation clubs that have played the most amount of games against each other than any other clubs," he said.

"Then there's the close proximity of where we live, we see the Roosters boys around a fair bit and then other goings on, a few movements here and there between players so there is a rivalry there. It's good for the spectacle of the game." 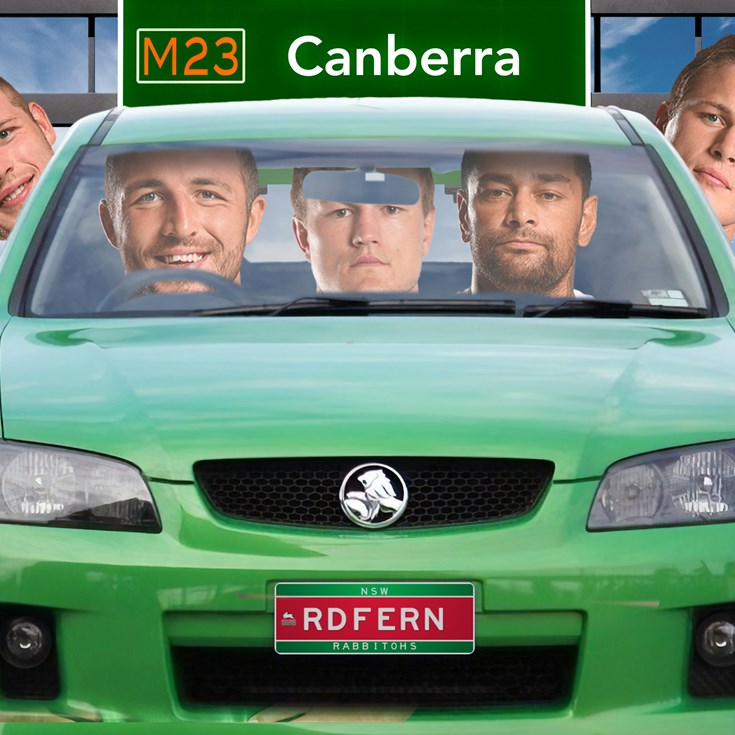 Bennett's orders: Make your own way to Canberra