The halfback could have had an early return to the Bunnies line up this week but coach Anthony Seibold made the call for him to come back into the side next week to ensure he is 100 per cent fit.

With Seibold confirming Reynolds would return for next week's match against the St George Illawarra Dragons, it means his replacement Adam Doueihi has one more chance to secure his spot in the side.

"'Reyno' (Reynolds) trained this week. I just made the decision not to select Reyno this week because out of our last eight weeks Reyno's only done four sessions with the team," Seibold said.

"He was back in full training yesterday for the first time so I just think that Reyno needs to do a little bit of work physically and I thought that it might be putting him at risk only having one or two training session and going to a big game on Good Friday against a physical Bulldogs team.

"Reyno's worked really hard this week and we will make a decision after the weekend but he'll be available for selection next week again.

"Reyno's an Origin player and he's the only premiership-winning halfback since 1971 so he's a pretty fair player coming back into the team. He will be back in the team sooner rather than later."

Souths make one change ahead of Good Friday clash

Seibold has confirmed that Richard Kennar has been rule out of the Good Friday clash against the Bulldogs, with Hymel Hunt to slot into the starting side and Braidon Burns joining the bench.

"We have had a little hiccup with Richie Kennar, Richie won't play tomorrow," he said.

"He's been very good for us on the right wing in the first couple of games.

"He picked up a slight strain to his hamstring at training so Hymel Hunt will come into the 13 and Braidon Burns will come onto the bench."

Seibold said defence would be key when the Rabbitohs take on the Bulldogs at ANZ Stadium.

"There will be a big crowd out there with the Easter show on. It's been a big rivalry on Good Friday over the last few years so certainly the guys are looking forward to it," he said.

"The guys have had an eye on this one for a little while. We've had a good preparation and the guys are excited about testing themselves against a pretty fair forward pack over there at the Bulldogs.

"We noticed [Kieran] Foran, [Jeremy] Marshall-King and [Moses] Mbye had their hands on the footy a bit more. I think in the first two games they were still playing in behind their forwards in Aaron Woods in particular so they played really direct.

"We've had to work really hard on our defence this week and Moses Mbye has been outstanding for them, a little bit similar to Tommy Trbojevic from the week before.

"If we're lazy on our kick chase than Mbye is going to make us pay. There been some similarities but Woods, Klemmer and Jackson they are all State of Origin forwards so we've had a real focus on making sure that we're strong through the middle." 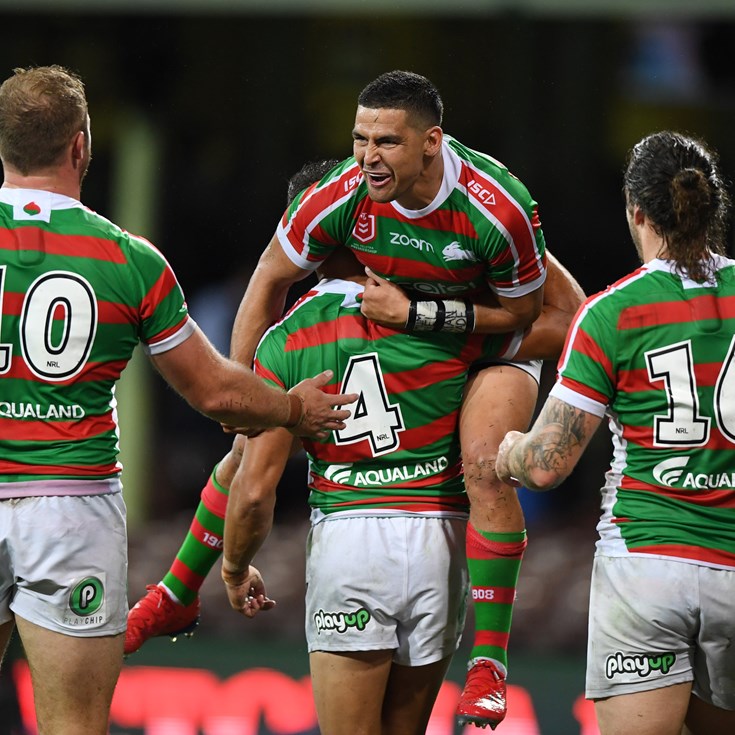 Rabbitohs power to 18-8 win against Wigan